Insights | Article | The Modern Slavery Act: A hard road ahead for the ‘race to the top’

The Modern Slavery Act: A hard road ahead for the ‘race to the top’

New report finds companies operating in industries known to be at high risk of slavery are failing to identify obvious risks of forced labour in their supply chains or take action to address them. 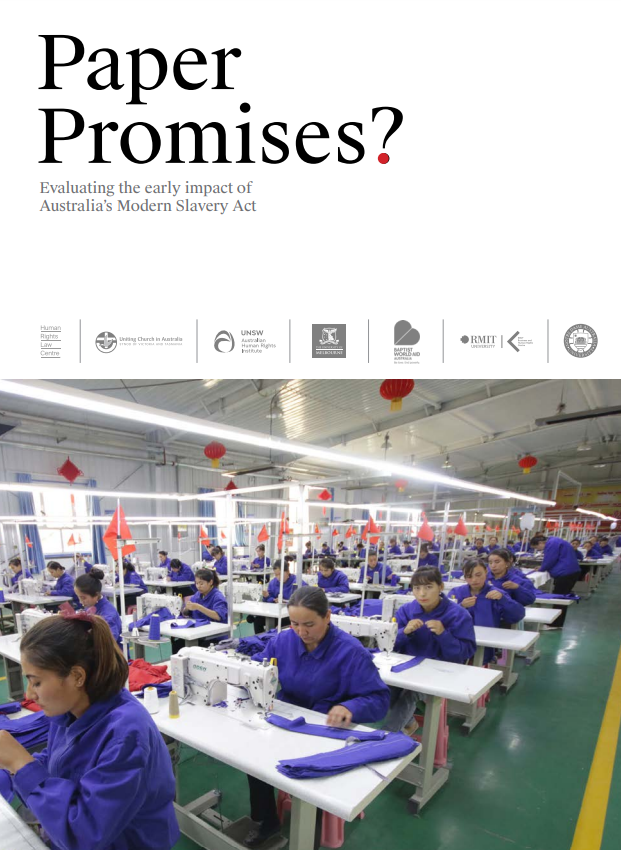 The power investors have to drive better corporate behaviour on human rights has come to the fore in recent years. With increasing shareholder activism globally and responsible investment now accounting for 40% of the total Australian market, social sustainability isn’t just good for people; it’s good for business. Mandatory disclosure laws, such as the Australian Modern Slavery Act (MSA), are intended to extend investors’ repertoire of assessment tools to inform decision-making for social impact investing. The assumption underpinning the Act was that it would drive a ‘race to the top’, creating upward pressure on large businesses to learn, innovate and lead. Unfortunately, a recently published evaluation of early reporting under the Act indicates this reality is not panning out — at least not yet — and there is quite a way to go before corporate modern slavery statements reflect real action and measurable change on the ground.

As we approach the MSA’s three-year review later this year–and three cycles of reporting–investors should keep a keen eye for reforms that will help them get more out of modern slavery reporting. As this new report shows, much more is needed to ensure modern slavery disclosure legislation provides key stakeholders with a meaningful tool to appraise corporate action on this important issue.

Paper Promises: Evaluating the early impact of Australia’s Modern Slavery Act is the result of a two-year collaborative project by academics, non-governmental organisations and human rights specialists to evaluate companies’ early performance under the MSA. Passed in 2018, the MSA is intended to reduce labour abuse risks by requiring over 3000 organisations to report annually on their efforts to assess and address risk of slavery in supply chains and explain how they will measure the effectiveness of those actions. The report examines statements submitted to the Australian Government’s Modern Slavery Register by 102 companies sourcing from four sectors with known risks of modern slavery: garments from China, rubber gloves from Malaysia, seafood from Thailand and fresh produce from Australia. 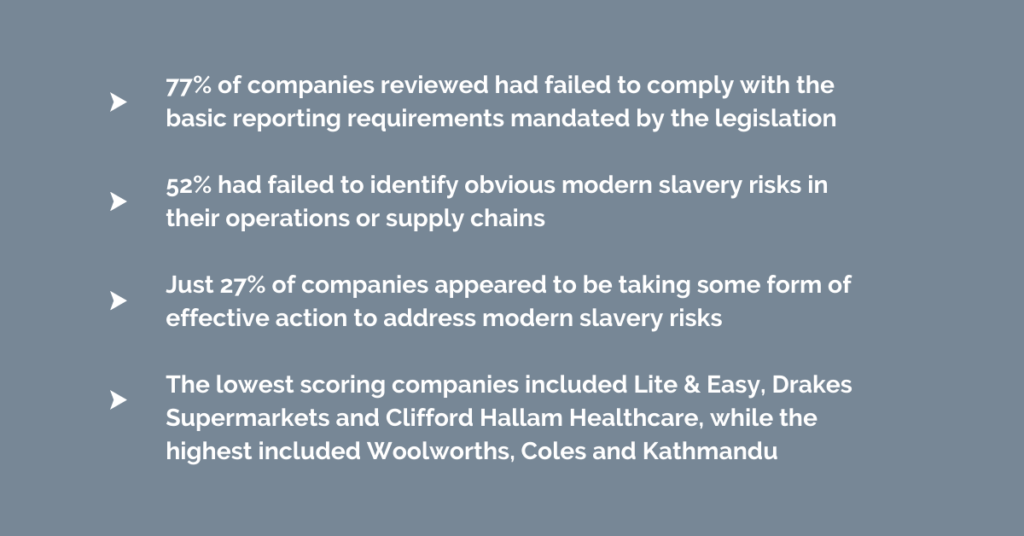 To make this assessment, the authors developed a series of performance indicators that considered basic compliance with the Act’s mandatory reporting criteria as well as alignment with broader human and labour rights frameworks. Unfortunately, companies reporting under the MSA are failing to hit the mark. Broadly speaking, the report finds that only half of the assessed companies acknowledge they are operating in sectors that are widely recognised as being high-risk for modern slavery. Most companies’ reports fail to effectively disclose how they address modern slavery risks, the actions taken to assess those risks, processes of internal consultation and the composition of the entities and supply chain’s workforce composition. Very few statements include meaningful plans to assess the effectiveness of slavery-focused supply chain assurance.

Improving responses towards modern slavery and access to remedy for affected workers is what has driven the realisation of the report. It will be particularly useful to investors who are interested to better understand the contexts in which companies are operating–detail that is largely absent in early modern slavery reporting, but which is critical to developing effective solutions.

Without this detail, it is difficult to assess whether risk mitigation strategies are appropriately designed and implemented to achieve positive impacts on the ground. For example, the report discusses the limitations of social audits in certain geographic areas, where workers are unable to speak freely and confidentially with auditors. The authors provide recommendations to companies, which may be used by investors, to identify other strategies that may be more effective than solely relying on audits.

Also relevant for investors will be information on government regulatory mechanisms, such as withhold release orders, which, when coupled with investor action, are helping to drive industry-wide improvements for workers. For instance, the report identifies how calls by BlackRock for the removal of directors at the world’s largest maker of medical grade gloves, followed by an import ban by US Customs and Border Protection against several gloves manufacturers, is starting to yield tangible results for workers. In one case, remediation involved upgrades in migrant worker accommodation facilities and repayment of more than USD$30 million (AUD$42.16 million) for illegal recruitment fees. Despite these positive developments, the authors report problems including passport confiscation and recruitment fees are still occurring within the industry demonstrating the need for worker-led social responsibility and ongoing investor scrutiny. China’s garment sector has faced a similar issues, with worldwide attention now focused on forced labour of muslim minorities in the Xinjiang Uyghur Autonomous Region. Across the four sectors analysed in the report, the garment sector has the highest number of public allegations of modern slavery; however, only one of the reviewed companies–Nike–addresses this in their statement and only one in four garment companies sourcing from China made any mention of the risk of Uyghur forced labour in their supply chains.

Similarly, the report finds that just under one in two food companies identify sourcing horticultural produce in Australia as high-risk for modern slavery practices and two in five seafood companies fail to identify seafood as a high-risk product in their supply chain.

Returning to the importance of understanding a company’s operating context to gauge the legitimacy of risk mitigation strategies, only a minority of companies demonstrate awareness of risks associated with the remote and precarious working conditions for horticultural workers and widespread misuse of piece rates in the industry. A slightly removed, but equally important fact for investors to be aware of is that, despite the risks within this industry, the Australian Government has never prosecuted any individuals in the fresh food industry under the slavery or human trafficking offences–despite compelling evidence of deceptive recruitment and forced labour in several cases. This represents a critical gap in the broader domestic framework for preventing modern slavery and speaks to the need for government and business to be working hand in hand to stamp out systemic problems in the industry.

On the positive side, the report did identify small clusters of leading companies that appear to be taking a more detailed and rigorous approach to both their reporting obligations and actions to address modern slavery risks. Importantly, this is not necessarily dictated by the size of the company, with several of the smaller companies achieving strong results in significant areas such as responsible purchasing.

At the heart of modern slavery reporting is the question of effectiveness. Despite high levels of quantitative compliance (meaning the majority of those who have to report have done so), the Paper Promises report finds the level of qualitative compliance in early statements to be very low. The authors explain that most statements have no evaluation plan for actions taken to assess and address modern slavery risk, let alone a long term vision that sets out any change expected to occur as a result of activities undertaken. Even the better performing statements are still action-heavy and light on outcomes. This presents particular challenges for investors.

The prevailing discourse regarding the role of investors rightly focuses on the extent to which asset managers are integrating ESG–in this case, the ‘S’ — into investment decision making. Unfortunately, the majority of corporate human rights reporting instruments steer companies toward process-based reporting and modern slavery reporting laws do not offer any specifications for how success should be measured.

If the Act is to serve the interests of investors, it must require reporting entities, including itself, to measure effectiveness and general compliance by outcome–not just process or aspiration. The Paper Promises report demonstrates that as long as companies are measured by their actions and not their achievements, corporate disclosure legislation will have limited effect and the responsibility for assessing corporate action will be outsourced to investors and consumers.

We won’t know how many statements have been deemed noncompliant until Australian Border Force publishes its “Implementing the Modern Slavery Act” report later this year, just ahead of the Act’s three-year review. In addition to driving better corporate performance, investors can play a vital role in improving the Act by calling for greater focus on effectiveness measurement and reporting.

Those who are new to this space should visit Investors against Slavery and Trafficking, an investor-led, multistakeholder project established to engage with companies in the Asia-Pacific region to promote effective action in finding, fixing and preventing modern slavery in operations and supply chains. In 2020, IAST called for companies to pursue real action to combat modern slavery, human trafficking and labour exploitation and many of their recommendations are mirrored in the Paper Promises report, including: The upcoming three-year review of the MSA provides an important opportunity for investors to ensure the government is fulfilling its own obligations in terms of setting an appropriate bar. This includes creating efficiencies in risk assessment through data collection and research into high-risk sectors; and applying government leverage to prevent goods made with forced labour from entering the Australian market. Perhaps more than anything, the Paper Promises report demonstrates that a problem as diverse and evolving as modern slavery requires equally diverse and evolving solutions. Without these, the race to the top will surely have a long and hard road ahead.

This report provides a guide on how to identify and treat human rights violations in the financial services sector. It is broken down into four parts to help the sector address modern slavery risks and develop more transparent reporting practices.

This report aims to guide reporting entities and investors on the requirements of the Australian Commonwealth Modern Slavery Act 2018. It informs and provides suggestions to companies and investors on how to identify, manage and reduce the risks and impacts of modern slavery.

Beyond compliance: Effective reporting under the Modern Slavery Act

Australian Government guidance to entities reporting under the Modern Slavery Act 2018. The guidance provides information on what is modern slavery, how it might impact on reporting entities, what obligations entities have under the Act, and how to report against mandatory criteria using case studies as illustrations.

Preventing modern slavery and human trafficking: An agenda for action across the financial services sector

This report combines research, resources and advice for financial institutions to use for information, awareness and guidance in implementing measures to address modern slavery and human trafficking concerns within their supply chain and operations.

Beyond compliance in the finance sector: A review of statements produced by asset managers under the UK Modern Slavery Act

This report emphasises that investors should recognise their leverage towards addressing modern slavery risks in their financial activities, including investment portfolios and their supply chains. The report is part of a wider supply chain transparency project to advocate for Modern Slavery Acts globally, by engaging governments and partnering with businesses.